Really pleased to release our first guest feature from lifelong Aston Villa fan Dan Colquhoun, who shares his experiences of being a Villa fan and all of the wonderful ups and downs that come with this.

The Covid-19 lockdown period has taught me a few things: 1. We have a fantastic NHS workforce. Bravo to you all. 2. I am fortunate to have a great group of friends and loving family. 3. I miss football incredibly and I will never take either of these things for granted again! Despite not having any football to follow at present, it does give me time to reflect on my time as a football fan, as an Aston Villa fan, and I must say a big thanks to James for giving me the opportunity to write this piece.

Saturday 20th March 2004 - One of the biggest days of my life to date, it was the first time my dad took me to watch his, and what would quickly be my, beloved football team. Villa Park is a beautiful and historic football ground, one of the best in England. Seeing that pitch and the 40,000 passionate supporters around it for the first time aged seven, was a moment I will never forget. What was to follow was a 2-0 loss to Blackburn and sixteen years of incredible highs and incredible lows. From being in the Europa League and on the cusp of qualifying for the Champions League, to plummeting towards the bottom of the Championship, it has been a rollercoaster journey.

I would say that I have had four thoroughly enjoyable seasons in the last sixteen years, which says a lot about how unsuccessful we have been. For three years, 2007-2010, my dad and I were season ticket holders and went to Villa Park for almost every home game during that period. At that time, I was fortunate in the sense I was just a child and had no real commitments, so I was able to attend so many games, whereas nowadays work means it is difficult to do so.

It was also fortunate that these three years were the best I have seen from Aston Villa this century. With the likes of Gareth Barry, James Milner, Ashley Young, John Carew and Gabby Agbonlahor in the side, we played attractive attacking football and teams didn’t want to play us. Beating Mourinho’s Chelsea 2-0 at Villa Park, Sir Alex’s United 1-0 at Old Trafford and being a matchday mascot during a 2-2 draw with Arsenal (above), were particular highlights. Whilst consistently finishing in the top six in the Premier League, we were beating the likes of Ajax in Europe. It was an exciting time to be a Villa fan; the club’s new slogan was ‘Proud History, Bright Future’ and with some more solid financial backing from the owner, it felt that we really could get into that top four and compete with the likes of Madrid, Juventus and so forth in the Champions League. Instead, what happened next ruined the club and on a large scale, the supporters' love for the club, for the next decade. 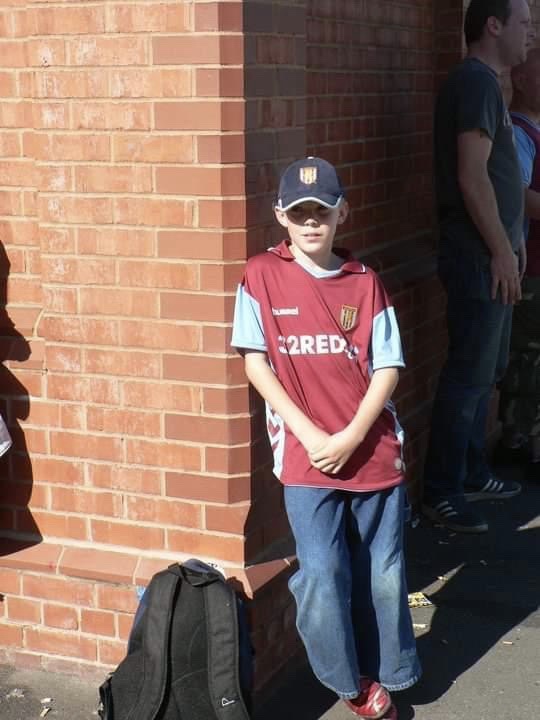 It felt that we really could get into that top four and compete with the likes of Madrid, Juventus and so forth in the Champions League. Instead, what happened next ruined the club and on a large scale, the supporters' love for the club, for the next decade.

This incredible team was quickly ripped apart, with American businessman owner Randy Lerner insisting the top players must be sold for big money and be replaced by cheap players playing in the French second division and others alike. The investment in the club stopped at the most crucial time, leading to Martin O'Neill, a top manager, and the likes of Young, Milner, and Barry leaving the club. What followed was five painful years of watching dull and defensive football before an inevitable relegation in 2016.

That 2015-16 season had several horrid memories. Being 2-0 up at title winners Leicester, only to lose 3-2, a 1-1 draw away at Wycombe Wanderers in the cup, which lead to captain Micah Richards fighting with the fans pitch side and then Joleon Lesccott ‘accidentally’ tweeting a picture of his Mercedes following an embarrassing 6-0 home defeat by Liverpool just to name a few. It was a terrible time to follow the club. There was no joy. Part of me kept thinking: “I wish I supported someone like City or United”. With the likes of Jordan Ayew and Adama Troare in the team, you wonder what went so wrong for us to win just 3 out of 38 games, losing 27. As we have seen at Leeds, Portsmouth, Nottingham Forest and other big clubs over the years, Villa were the victims of horrendous mismanagement. A foreign businessman with little interest in football and no passion for the club, had shattered us completely.

The good news was Lerner quickly sold the club. The bad news was that he sold it to Tony Xia (Dr Tony), a multimillionaire Chinese businessman, who shared many ludicrous ambitions and promises with the fans. Our first season in the Championship was almost just as painful, eventually finishing 13th but at one point looking as though League One was on the horizon. Dr Tony had severe financial difficulties, meaning the club faced a winding up order and the threat of going out of business. The pain continued. The only positive at this point in time was seeing the growth of Jack Grealish as a player and leader. Following previous evidence of immaturity, famously pictured passed out on the floor in Tenerife, it was time he stepped up and fulfilled his potential when the club needed him most, and boy he started to do that. The 2017-18 season saw us reach the play off final, mainly due to the consistently excellent performances of Grealish. He was lighting up the league, turning defenders inside out and scoring goals. There was no way we would keep this boy if we lost that final. A painful day at Wembley, which thankfully I was not in attendance for due to being on holiday, saw Fulham get promoted and surely the end of Super Jack’s Villa career.

After a long summer of transfer speculation (and thankfully a change in ownership at the club), the first day of the new season came. Hull away. A 3-1 win but what looked to be a goodbye wave to the fans from Grealish, with a move to Spurs imminent. The transfer window ended days later and miraculously Grealish was still a Villa player. From that moment on, it was fate that he would captain his boyhood club back to the Premier League. Dean Smith, an attacking minded (and boyhood villa fan) manager, replaced the dinosaur that was Steve Bruce, and it led to a hugely enjoyable season. Being in the Holte End to see us defeat our fiercest rivals Birmingham 4-2 was a particular highlight. The atmosphere was incredible and the feel-good factor was back amongst the fans at Villa Park for the first time in almost a decade.

We later went on to win 10 games on the bounce, including a Grealish winner away at Birmingham having been punched earlier in the game by a blue nose supporter who had ran on to the pitch. The play-off semi finals came around quickly, where we beat local rivals West Brom on penalties. I almost had a heart attack during that shoot-out and then for the second year running, we found ourselves at Wembley for the play-off final. Derby County stood between us and our Premier League return. The difference to the previous year was that every Villa fan on that day knew we were going up. We had already beaten Derby 4-0 and 3-0 in the League, and both our captain and manager were boyhood Villa fans. Nothing was going to stop us. A night of heavy celebrations followed, and with new passionate owners and a decent squad, it felt like a great time to support Aston Villa once again.

This Premier League season has been a tough one however, as it often is for promoted clubs. We will have to play well to stay up, but with the likes of Grealish, Tyrone Mings and John Mcginn in the team, I am confident we will survive once the football season eventually gets underway again, and it will hopefully lead to great things in years to come. Even if we don’t, you’ll no doubt find me at Rotherham away again next year. The passion you have for a club can never be changed, even at the toughest of times, as millions of people will agree. For me this is one of the great things about the beautiful game.

So there you have it, as you can tell it has been a real mixture of emotions supporting this club. However, going back to the thought I had during those tough times, there is no way I would rather support the likes of City, United or Chelsea, whose fortunes rarely change from season to season. To share all of the highs and lows with my dad over the years has been great, and I wouldn’t have changed it in any way! Well, I would have changed the relegation season in every way possible, but you get my point.

Against The Elements: The Eruption of Icelandic Football

The Elements of the Game